WHO IS DR. BRUCE LIPTON?

Dr. Bruce Lipton is an internationally recognised leader in bridging science and spirituality. His post-doctoral scientific research has revolutionised the understanding of the link between mind and matter.

Drawn to the truth science had to offer on life’s bigger questions, Lipton began his scientific career as a cell biologist. Lipton received his Ph.D in Developmental Biology from the University of Virginia at Charlottesville and at the time was one of a few people in the world cloning stem cells. He spent eighteen years on cloning stem cell government-funded research, and went on to become internally recognised for his stem cell research. He has been honoured for his teaching skills as a medical school professor.

While cloning human muscle cells, Lipton discovered that by simply changing the culture solution (the environment) that each of the genetically identical cells were growing in, he could change the outcome of the type of cell they developed into e.g. muscle, bone or fat. This led to the realisation that it was the environment that was controlling the fate of the cells rather than the genes, as traditionally believed.

This discovery started Lipton on a different trail to that of his colleagues, who were focusing on the genome and building the foundation to create what is known as the Human Genome Project (an international scientific research project with the goal of determining what makes up human DNA, and to identify and map all the genes of the human genome).  Lipton published two major scientific publications which defined the molecular pathways connecting the mind and body.  The results from the Human Genome Project failed to demonstrate that genes control biology, proving Lipton’s point, and many subsequent papers by other researchers have since validated his concepts and ideas.

Lipton’s scientific discoveries had a major impact on his career and transformed his personal life. His deepened understanding of cell biology highlighted the mechanisms by which the mind controls bodily functions and implied the existence of an immortal spirit.  By applying his theories to his personal life, Lipton discovered that his physical well-being improved and the quality and character of his daily life was greatly enhanced.

Lipton shares his leading edge findings, and explains how they dovetail with mind-body medicine and spiritual principles, through his books, audio programs, DVD’s, television appearances and radio interviews. Lipton has tailored his award-winning medical school lectures so that they are accessible to lay audiences and conventional and complementary medical professionals. He is a sought after key-note speaker and workshop presenter internationally.

Lipton has received hundreds of anecdotal reports from former audience members who have improved their spiritual, physical and mental well-being by applying the principles he discusses in his lectures. His work has been a catalyst for my personal transformation and influenced Chapter 5 of My Story. You can read more about the direct impact he has had on my life here.

Who is
Dr. Bruce Lipton? 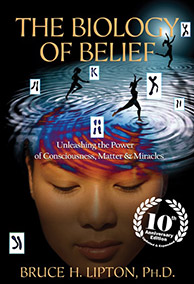 The Biology of Belief
(Book)

This site presents the information and tools that changed my life – resources I wish I’d discovered earlier. I felt called to share these resources with others so they could benefit from my self-discovery and personal transformation journey. My intention is to take the master out of the how by mapping out a practical and clear path for you to embody the like you truly desire.