WHO IS GREGG BRADEN?

Gregg Braden is an internationally renowned speaker and author who joins the dots and fills in the gaps between science and spirituality by marrying the latest scientific findings with the wisdom of ancient cultures.

Born with an innate curiosity to understand the origins and purpose of life, Gregg became an earth scientist, then a computer systems designer in the aerospace and defence industry.

Despite successful careers as an expert in his chosen fields, Gregg found that science alone didn’t provide him with all the answers to who we are and our origins. Using his training as a scientist, he began to look for answers in the world around him.  This led him on a journey to some of the world’s most isolated and remote locations on Earth.  The temples, villages and monasteries that Gregg visited allowed him to begin to find the answers he was looking for.

Through observing the traditions still practiced by ancient cultures, studying forgotten texts and keeping abreast of current scientific studies, Gregg began to join the dots between science, religion and spirituality.

He left his scientific career in 1990 to dedicate himself to developing and presenting his findings. His discoveries are shared through his books, seminars and workshops and as a personal guide to sacred sites throughout the world.

Gregg’s life purpose is to fill in the gaps between science and traditional wisdom so that we can have a strong understanding and knowledge of who we are and what our role is in relationship to each other, the planet and the universe.

He is an active member of several leadership organisations, including the Evolutionary Leadership think tank, founded by Deepak Chopra and has received numerous awards in recognition of his insights and innovation.  He is also a Templeton Prize Nominee.

Gregg’s work has been shared on every continent of the world.  In recent years, he has presented his seminars and trainings to Fortune 500 companies, the U.S. Military and international businesses.  He is also featured in media specials on the History Channel, the Discovery Channel, National Geographic, ABC and NBC networks.

Five of Gregg’s books have been New York Times bestsellers.  His books include:

His book, The Divine Matrix, was recently selected as the source for the made for television feature, Entanglement. The Divine Matrix is now a textbook for college level courses exploring new discoveries of science and our relationship to the world.

Gregg Braden regularly leads tours through sacred sites located in Peru, New Mexico, Mexico, Egypt, Tibet and Israel. These tours change people’s lives forever. His work has been a catalyst for my personal transformation and influenced Chapters 1, 2, 3, 4, 5 and 7 of My Story. You can read more about the direct impact he has had on my life here or visit his website.

Who is
Gregg Braden? 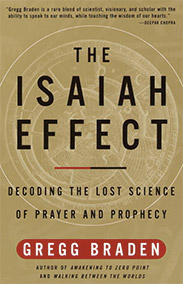